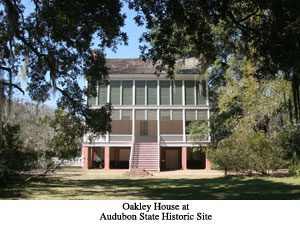 Beloved historian and preservationist Libby Dart always said St. Francisville’s Audubon Pilgrimage tour of historic homes and gardens had as much to teach the locals as the visitors---an appreciation of area heritage, a spirit of community, a sense of place, all still relevant today. And this year’s pilgrimage taught in a new way another lesson from what might be called a bird’s eye view: appreciate what you’ve got, because when it’s gone, it’s gone.
While the popular annual tour as usual featured fabulous historic homes, hosts decked out in 1820s costumes, glorious gardens and a rural homestead recreating old-time crafts and skills, this year’s pilgrimage had a welcomed new focus on its patron saint, artist John James Audubon and his short but productive stay in West Feliciana Parish. Hired in 1821 to tutor the young daughter of Oakley Plantation, where he was paid $60 a month and had afternoons free to walk in the woods and study the birds, the artist would complete more than 70 of his life-sized bird drawings in the St. Francisville area and over 100 in Louisiana, more than in any other state.
The lush landscapes and rich bird life left the flamboyant artist so spellbound and inspired that the St. Francisville area is well represented among the 435 hand-colored prints made from engraved plates that were released in a series over the period from 1827 to 1838. On the 2017 pilgrimage dedicated to his memory, a remarkable exhibit of museum-quality reproductions of most of his West Feliciana birds was mounted in the 1819 Audubon Market Hall on Royal St. Each was identified as to location, whether at Oakley, Bayou Sara, Beech Grove, Tunica Swamp, Beech Woods, Sleepy Hollow, St. Francisville, Thompson Creek or simply Feliciana. 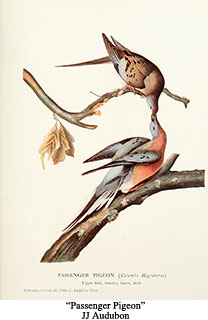 Many of the birds he found in the area are still around today, but some are not. The passenger pigeon, for example, in the 1850s was the most abundant bird in North America, maybe even the world, with 19th-century migrations darkening the skies and some 136 million breeding adults devouring farm crops and nesting in trees whose overloaded branches would sag to the ground. But by the 1890s wild flocks numbered in the dozens rather than hundreds of millions. The once prolific Carolina parakeet (parrot) was hunted for sport and meat into extinction. The Ivorybilled Woodpecker was another one lost, though some optimists still hold out hope of finding a few in remote areas; the last of this huge bird was said to have been shot, and by a state legislator who should have known better.
Extinction of certain bird species had a number of causes, mostly habitat loss due to rural agriculture and urban sprawl, pesticides impacting egg shells, wholesale slaughter for food or fun, even the popularity of feathers as millinery decoration (the great snowy egret has fortunately made a comeback after being nearly wiped out as hunters slaughtered adult birds for their curling nuptial plumage, often leaving nestlings to die unattended).
The last Great Auk in the British Isles was clubbed to death by islanders convinced it was a witch due to its awkward appearance with tiny wings and large white spot on its head; the population of these penguin-like birds had already been decimated for their down used to stuff pillows. When they’re gone, they’re gone. By the same token, there are those today who advocate for the removal or destruction of reminders of offensive or divisive events or eras in history. Far better, it would seem, to leave them that we might appreciate what they have to teach us and learn their lessons. 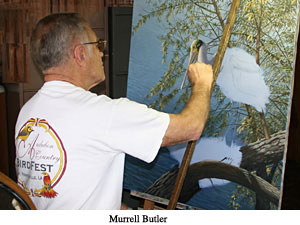 And from these losses do come lessons. Local artist/naturalist Murrell Butler, who marvels at what Audubon must have seen in this vast habitat teeming with birds, notes some successful comebacks, notably bald eagles, wild turkeys, egrets, roseate spoonbills that were also killed for their rosy plumage, even a tiny resettled population of whooping cranes. And he also points out that there are some new species that have arrived in the state since Audubon’s time…English sparrows, European starlings, cattle egrets probably blown by hurricane winds from Africa in the fifties first to the Bahamas and then the mainland U.S., new types of doves from Europe and Mexico, and others.
This is an artist who preserves in paintings wildlife from the past as well as present; his most recent series of oil on canvas paintings of Bayou Sara creek will be revealed at a reception at Backwoods Gallery in St. Francisville on May 25 (5-8 p.m.). Now in his 80s, he recalls the beauty of the creek, with nesting wading birds, migratory Canada or blue geese, even a trumpeter swan seen by his grandfather in the thirties, and clear water and deep swimming holes. Now he sees the creek full of discarded garbage, when as a child he remembers its water so clear he could drink from it.
But he also sees hope, with a resurgence of interest in birding and in keeping waterways like Bayou Sara clean for kayaking and other recreations. And in St. Francisville itself, under the guidance of popular nine-term mayor Billy D’Aquilla and some sensible zoning regulations, the little river town seems to have struck the right balance between preservation and progress. Passengers debarking from visiting steamboats rave over the charm of this Main Street community, which actually owes much of its successful survival to the fortunate mix of commercial and residential structures giving it a 24-hour presence downtown, keeping it very much alive. 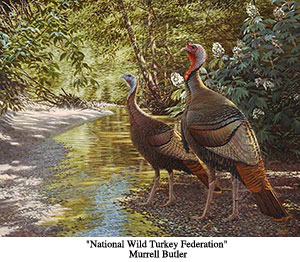 Of course there have been flush times and lean years, too; all was not moonlight and magnolias, and some historic structures were regrettably lost. But much has been preserved, and the 1700 or so town residents count their blessings as they stroll the bricked sidewalks beneath overhanging live oaks, past whitewashed picket fences and gingerbread galleries, lawns abloom with azaleas or camellias or crepe myrtles depending on the season, and front porch rockers beckoning after a busy day.
Consistently on the list of most beautiful small towns across the country, St. Francisville also has a small bookstore among the top ten in the state, enormously popular festivals celebrating music and art and literature and history and holidays, fun family-friendly special events, some top-notch overnight accommodations, restaurants with a surprising variety of ethnic origins, and beautifully restored plantations in the surrounding countryside open for touring. Not to mention recreational opportunities in the extensive parish sports park, at The Bluffs golfing resort, and in the Tunica Hills…hiking, biking, bicycle racing, birding (of course), tennis, kayaking on Bayou Sara, hunting and fishing.
And so while the losses must be regretted, at the same time lessons must be learned from them. What’s left that is unique and significant must be appreciated and preserved and built upon, because when it’s gone, it’s gone. 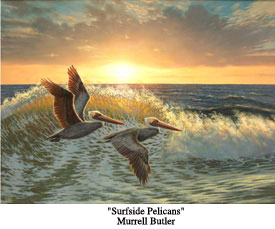 The month of April is full of activities in the St. Francisville area, beginning April 1st with an Easter Egg Hunt for children at Rosedown State Historic Site from 1 to 5; the plantation gift shop also has a special Civil War exhibit throughout the month. April 16 Arlin Dease hosts the spectacular Easter Sunrise Service, nondenominational and free for all, in the lakeside Greek amphitheater at Hemingbough. The enormously popular Angola Prison Spring Rodeo and Craft Show draws crowds Saturday and Sunday, April 22 and 23; grounds open at 9 a.m., rodeo starts at 2 p.m., and visitors are advised to remember that this is a penitentiary and regulations should be followed to the letter. April 28 Grace Episcopal Church provides an acoustically perfect setting for Baton Rouge Symphony’s concert featuring a string quartet, while the Tunica Hills Music Festival is set for April 29. For information, refer to www.stfrancisvillefestivals.com.
Located on US Highway 61 on the Mississippi River between Baton Rouge, LA, andNatchez, MS, the St. Francisville area is a year-round tourist destination.  A number of splendidly restored plantation homes are open for tours: The Cottage Plantation (weekends), Myrtles Plantation, Greenwood Plantation, plus Catalpa Plantation by reservation; Afton Villa Gardens and Imahara’s Botanical Garden are open in season and are both spectacular. Particularly important to tourism in the area are its two significant state historic sites, Rosedown Plantation and Oakley Plantation in the Audubon state site, which offer periodic living-history demonstrations to allow visitors to experience 19th-century plantation life and customs (the main house at Oakley is closed for lead abatement, but the visitor center and grounds remain accessible and planned programs continue). 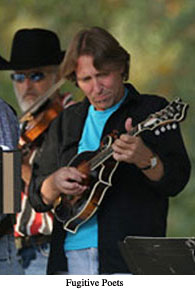 The nearby Tunica Hills region offers unmatched recreational activities in its unspoiled wilderness areas—hiking, biking and especially bicycle racing due to the challenging terrain, birding, photography, hunting, and kayaking on Bayou Sara. There are unique art galleries plus specialty and antiques shops, many in restored historic structures, and some nice restaurants throughout the St. Francisville area serving everything from ethnic cuisine to seafood and classic Louisiana favorites. For overnight stays, the area offers some of the state’s most popular Bed & Breakfasts, including historic plantations, lakeside clubhouses and beautiful townhouses right in the middle of St. Francisville’s extensive National Register-listed historic district, and there are also modern motel accommodations for large bus groups.
For visitor information, call West Feliciana Tourist Commission and West Feliciana Historical Society at 225-6330 or 225-635-4224, or St. Francisville Main Street at 225-635-3873; online visit www.westfeliciana.us, www.stfrancisvillefestivals.com, www.stfrancisville.net or www.stfrancisville.us (the events calendar gives dates and information on special activities).
Posted by Blue Goose Media at 10:37 PM